Dedicated in 1915 as the “Theater for All the People,” the description still holds true for the the Mineral Point Opera House. Claude and Stark, an influential Madison architectural firm, designed the original vaudeville house, which, in its early days, attracted nationally acclaimed touring artists who presented first class entertainment to an enthusiastic and prosperous community. With a balcony and two boxes, the auditorium originally seated over 700 spectators who were treated to live drama, comedy, grand opera and symphonic music. 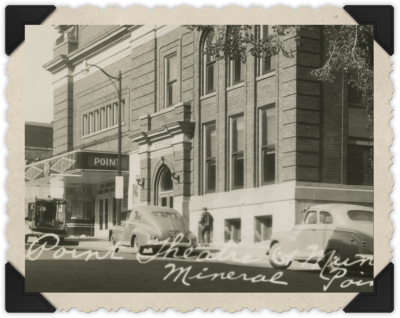 The exterior of the Mineral Point Opera House, then called the Point Theater, circa 1935.

As movies gained prominence as entertainment, the community spent their weekends in the theater enjoying first run movies through the years. A local group of talented actors, directors and entertainers formed The Shake Rag Players who delighted local audiences for decades.

The many years of enjoyment and use took a toll on the theater, and updates, repairs and safety features became necessary. In 2008, a non-profit group was established and a campaign to restore the Opera House was created as a collaborative endeavor involving many community members. A fundraising campaign was launched, producing a large gift from a generous local donor and a matching grant from the Jeffris Family Foundation. The community and the City of Mineral Point pitched in and the necessary funds were raised!

Under the leadership of Phil Mrozinski, who served as a longtime volunteer and theater manager, and a group of dedicated local residents, a comprehensive restoration plan was developed. Strang Architects, Madison, Wisconsin was hired to plan and oversee the 2.5 million dollar restoration. J. Daniels Construction of Madison served as the excellent building team. 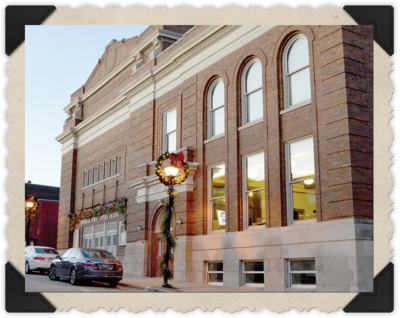 The exterior of the Mineral Point Opera House as it appears today.

The master plan outlined necessary updates to lighting, electrical, HVAC, fire-safety, flooring, accessibility, seating and more. This team looked to the staff of the Conrad Schmitt Studios to design the Opera House’s new decorative scheme. Color design renderings and onsite samples of tones and finishes, offering a glimpse of the new decorative scheme were executed and approved. Studio artists replicated lost ornamental plaster, and carefully decorated the historic architectural elements of the House.

This elegant transformation is a testament to working towards achieving a dream, no matter how big. The restoration has breathed new life into the Opera House as an enthusiastic community witnessed this magnificent old theater return to its original grandeur. The theater is supported by the attendees and community and is run as a non-profit organization with a governing board and a part-time salaried manager.

Today, this theater is considered an elegant jewel, maintaining its original integrity of the past, nestled in the Driftless region of Wisconsin, in the beautifully restored historic town of Mineral Point. Come join us in our beautifully appointed venue hosting a diverse mix of cultural, musical, visual/film and community and private events throughout the year.