Verified Laughs returns to the Mineral Point Opera House after taking a year off due to the pandemic.  Verified Laughs is a hit weekly standup show performed at the World Famous Laugh Factory in Chicago.  This year we will be bringing four hilarious comedians from the Laugh Factory to perform on the Opera House stage.  The previous shows in Mineral Point have sold out, so don’t wait to purchase your tickets. It’s always a fun night and the comedians love the town and the Opera House. See you in September! (Full Lineup to be posted later this summer) 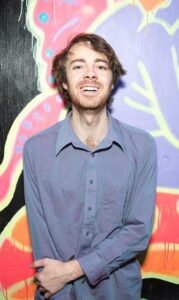 Geoffrey Asmus began performing stand-up in 2013 immediately after wasting $143,548 in college. Within a short time Geoffrey won Comedy on State’s “Funniest Person in Madison 2015” and Penguin Comedy Club’s “Funniest Person in Iowa 2015,” both times beating out the guy who invented meth, Quentin. Soon after Geoffrey was selected as a ‘New Face’ performer at Just For Laughs Montreal and was featured on FOX’s ‘Laughs’ and Kevin Hart’s LOL Network. He has also performed at the Laughing Skull, Bridgetown, Limestone and Boston comedy festivals and won 3rd place in Atlanta’s 2017 Laughing Skull festival. Geoffrey has opened for Brian Posehn, Aparna Nancherla, Todd Barry, Daniel Sloss and Alonzo Bodden among others. Onstage and offstage Geoffrey will not make eye contact, which is a blessing for all. 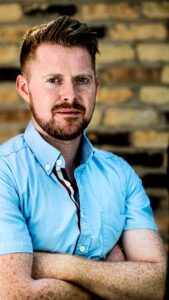 Daryll Schmitz is a nationally touring comic that doesn’t hide the embarrassing qualities and moments that make him who he is. Born and raised on the mean streets of small-town Wisconsin, he’s quickly acclimated himself to the quiet life of Chicago. Daryll is a graduate of The World Famous Second City Training Center’s Writing and Stand-Up Programs. He is an Executive Producer of Verified Laughs at The Laugh Factory, Producer of Sofar Sounds Comedy nights, and a Producer of Room 13 Comedy. Daryll is a regular at The Laugh Factory, Zanie’s, and The Comedy Bar in Chicago. Daryll has performed in clubs throughout the country, including the world-famous Comedy Store in Hollywood. He realizes none of this information is all that impressive.