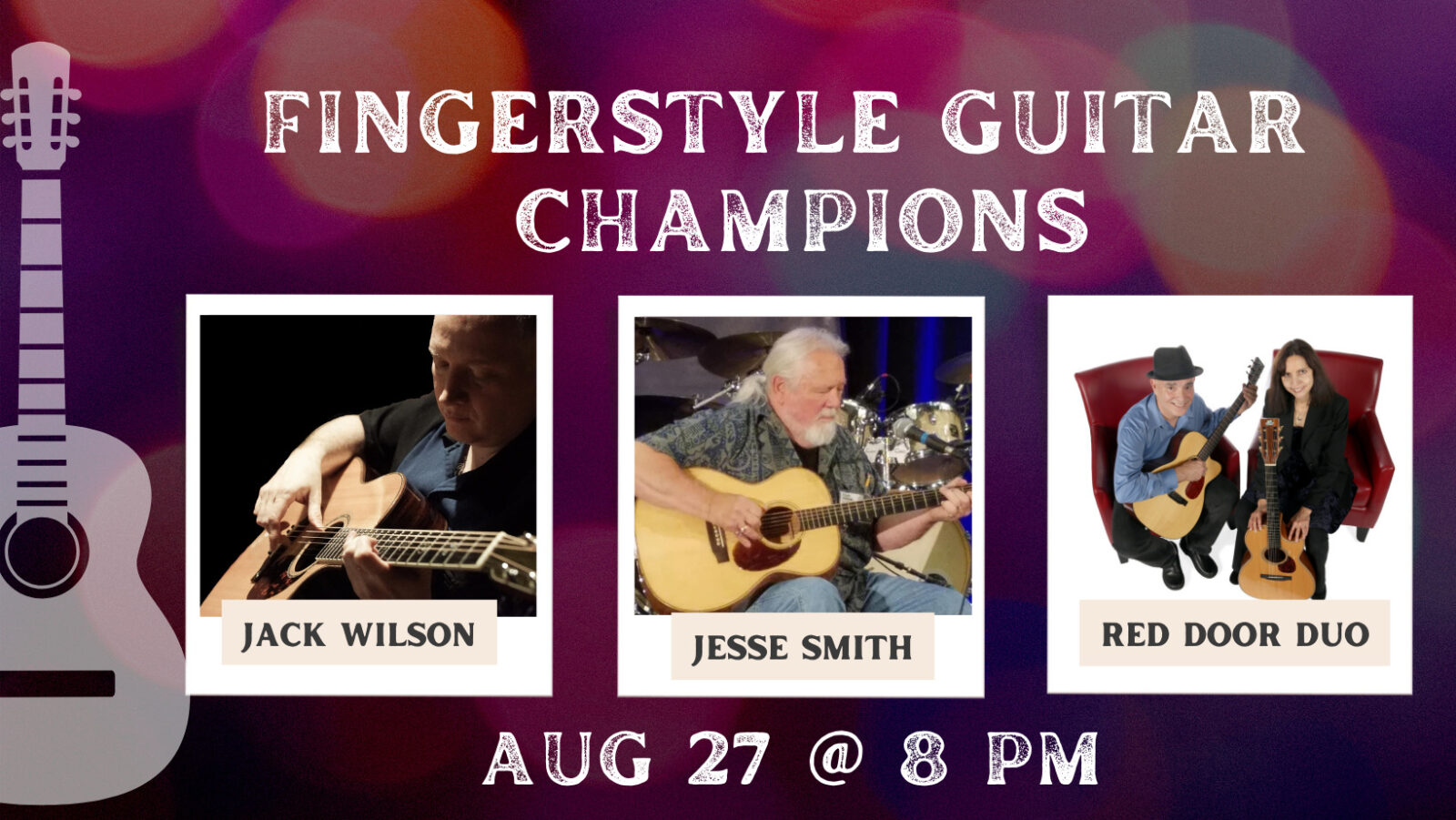 International fingerstyle guitar champions take over the Opera House on Saturday, August 27th. The Red Door Duo David Irwin and Helen Avakian, Jack Wilson, and Jesse Smith will perform separately and together, showcasing their skills as award-winning guitarists. The show starts at 8:00 pm and doors will open at 7:00 pm. Tickets are $20 in advance and $25 on the day of the show. Purchase tickets at mpoh.org/events or at the box office.

Red Door Duo performs “new acoustic” songs and instrumentals, and is especially known for their fingerstyle guitar music. Vocal harmonies, ukulele, and mandolin are also known to make an appearance in their concerts.

“Much to marvel at… full of life and energy.” Blair Jackson, Acoustic Guitar Magazine

Each is an established artist in their own right. Avakian has earned numerous accolades for her performance (voted “Favorite Acoustic Act” four times by Rhythm and News), songwriting (eight first prizes from the NewSongs Contest at the Walnut Valley Festival in Kansas) and has shared the stage with artists Peter Yarrow (Peter, Paul and Mary), Mary Fahl of the October Project, guitar stars Pete Huttlinger, Muriel Anderson, and Christie Lenee. She has even done a touch of acting (along with guitar playing) in a performance with Vanessa Redgrave and her mother, Rachel Kempson Redgrave. Helen’s singing and guitar playing are featured on a track from Pete Seeger’s Grammy-nominated album “The Storm King.” Irwin has an illustrious career as a soloist featuring at Madison’s Brazilian Carnaval numerous times, and performing his solo guitar arrangement of The National Anthem on ESPN and at other sports events such as the World Olympic Style Wrestling Competition.

However, when Red Door Duo’s individual forces unite on stage, their combined influences form an entirely original and mesmerizing blend of acoustic traditions. They have thrilled audiences from the Midwest to New England with their wildly imaginative set lists, featuring captivating new works, contemporary covers, and even reinterpretations of Baroque and Classical masterworks. Through their music the two permit audiences an authentic glimpse into their ever-evolving musical partnership both on and off the stage. They have recently released their first recording together, “Door Number One.”

2016 International Fingerstyle Guitar champion Jack Wilson will take you on an expedition of instrumental acoustic and electric guitar music. Treating each finger and his thumb on his right hand like a band member, he effortlessly turns the guitar into a band, cranking out rock, R&B, country, jazz, blues, and classical music. Expect to see a stand filled with guitars on stage; each patiently waiting their turn to give a textural contribution to this six-string manipulator.

Have you ever heard a cowbell sound being coaxed out of a guitar? That is exactly what you will hear on the opening track from Jack’s CD Fidgety Digits covering the song “Low Rider” by the group War. This feat even stumped the judges and other contestants when competing in guitar competitions. Not only does he recreate the cowbell, he weaves his way through the complex counterpoint between the bass line, vocal melody, and flute break, all while keeping a backbeat on 2 and 4. His CD includes covers from Steely Dan, Johnny Cash, The Beatles, and Billy Joel, some of which are performed as faithful recreations and others reinvented. There are also four original compositions and a couple of theme songs.

His kitchen sink approach to music can be attributed to a variety of sources from listening to his mother’s R&B collection, learning country and bluegrass standards from his guitar-playing grandfather, playing in hard rock and heavy metal bands in high school, and as a jazz and classical guitar major in college. So driven to play music, he once played guitar one-handed temporarily because of a broken right hand. When the cast came off, he flipped the guitar around and played left-handed for a couple of months to get the dexterity back in his right hand. This type of perseverance has paid off with 8 guitar contest wins and a bass contest win. Though being recognized for his skill as a guitar player, it has not slowed down Jack’s passion to push his musicianship even further to enhance his color palette for his “sonic kaleidoscope.”

Jesse is a guitar player who has been playing guitar for over 60 years (that’s a long time!). He enjoys it as much now as he did when he started at the age of 11. He played lead guitar in his father’s band as a youngster, ages 13 – 17. He has also played a wide variety of genres in many different bands.

Jesse started entering guitar contests at the young age of 61. He won the Wayne C. Henderson Festival Guitar Competition in 2019 and the Winfield Kansas International Fingerstyle Guitar Championship last September 2021 after being a top finalist previously.

Jesse loves sharing music with others and does so through guitar lessons, workshops, and jam sessions. He is a retired carpentry teacher and now builds acoustic guitars. He is from Wadsworth Ohio and lives there with his wife of 53 years. He is doing some solo guitar performances and plays his own arrangements of the many styles of music that he plays and even sings a little. If you like instrumental music and guitar you are sure to enjoy Jesse’s music.