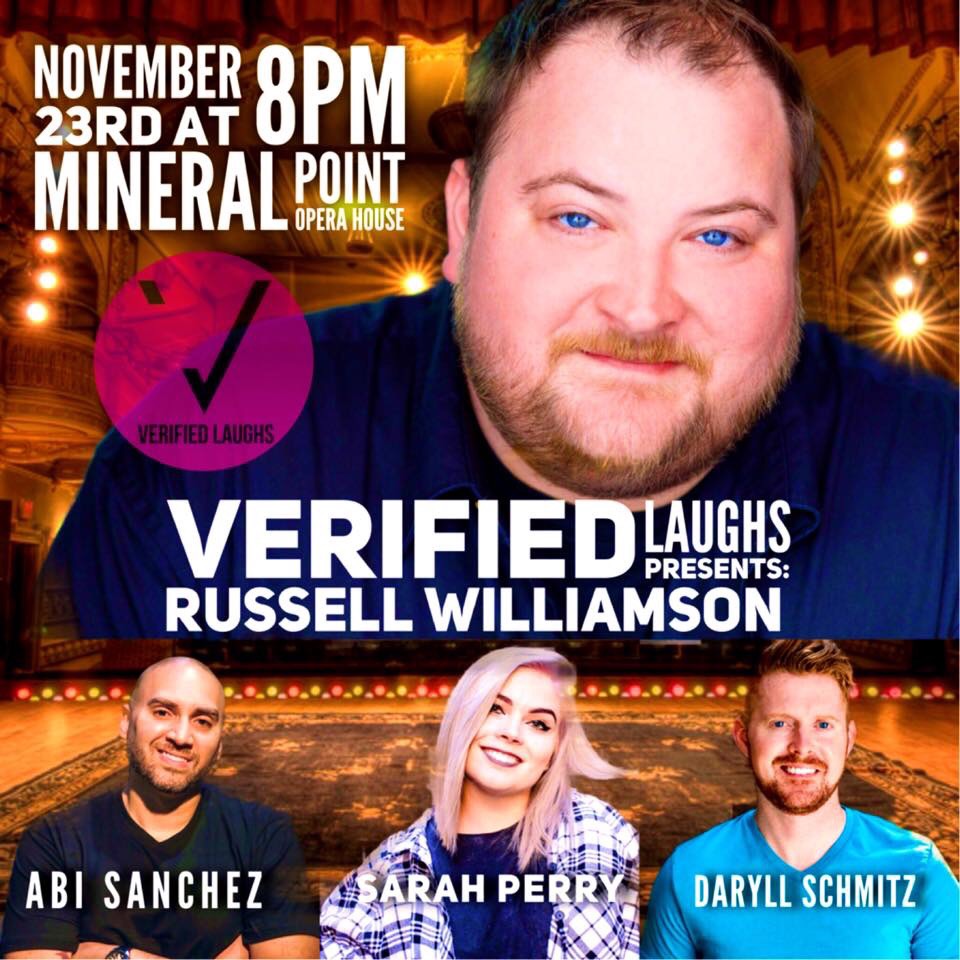 Russell Williamson – New Jersey native Russ Williamson moved to Chicago in 2005 to pursue a career in comedy. During that time he’s played Chicago’s biggest rooms and has worked with comedy’s biggest names. You can see him in the NBC show Chicago Fire. You may also have seen Russ in the Starz series BOSS or the major motion picture Contagion. Russ Williamson is well on his way to becoming a household name, and once you see him perform you’ll know why.
Sarah “Sperry” Perry – Sarah is a Chicago based comedian and writer. Defying her parents’ wish that she may someday become a successful human woman, Sarah graduated from Columbia College Chicago in 2015 with a degree in Comedy Writing and Performance. In January 2016, she started a pant-less podcast called Laib Your Life and shortly after, the podcast was picked up by The Laugh Factory Chicago podcast network. You can find her at various stand-up shows and showcases around Chicago including The Blind Bet, Just Dickin’ Around, Pilsen Stand Up, The Blackout Diaries, The Laugh Factory and more!
Abi Sanchez – Taking a comedy workshop with comedic legend Rich Ramirez was all Abi Sanchez needed to realize that comedy is what he wanted to do. Abi hit the stage in 2010 and hasn’t stopped since. His standpoint on family life, relationships, friends, social media and life’s vices have all been formed by a childhood of too much TV and not enough guidance. His mellow demeanor and stage presence captivate audiences which has allowed Abi to form a category all his own. He has related to audiences from the city streets of Chicago to deep rural parts of the Midwest. Leaving many impressed with what he has been able to do in a short amount of time, Abi has positioned himself as one of the up and coming comics to watch out for and recently performed at the prestigious Just For Laughs Festival in Montreal.
Daryll Schmitz is a comic that doesn’t hide the embarrassing qualities and moments that make him who he is. Born and raised on the mean streets of small town Wisconsin, he’s quickly acclimated himself to the quiet life of Chicago. Daryll is a graduate of The World Famous Second City Training Center’s Writing and Stand-Up Programs. He is a Producer for a weekly show at the Laugh Factory called Verified Laughs, a Producer of Stray Bits, and has written a monthly sketch comedy show for Second City. This year Daryll has performed in clubs throughout the country including Las Vegas, Dallas, Denver, and The World Famous Comedy Story in Los Angeles.
← Previous Next →